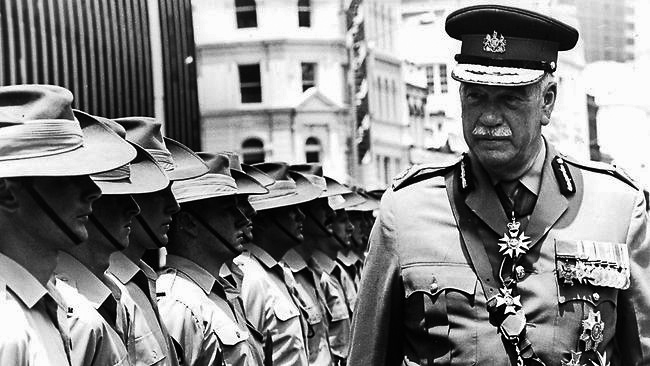 Roden Cutler, Victoria Cross winner, diplomat and later Governor of New South Wales, was born at Manly on 24 May 1916.

Growing up he was a keen sportsman who enjoyed swimming, sailing, cycling and cricket. Cutler began his education at the Manly public school and gained admission to Sydney Boys High School at the age of 15.

His heroism was demonstrated early in life when as an 18 year old lifesaver, Sir Roden swam to the aid of a surfer who was being circled by a large shark. The shark brushed him twice as he helped the surfer to the beach. He studied economics at Sydney University at night and later joined the public service. In March 1936 he joined the Sydney University Regiment. On 10 November 1939, he was commissioned as a lieutenant in the militia.

Roden Cutler joined the AIF on 1 May 1940 and was posted to the 2/5th Field Regiment of the 7th Divisional Artillery. His unit left Australia on 20 October 1940 for the Middle East. Cutler’s first experience of combat came against the Vichy French in Syria in June 1941. At Merdjayoun, Cutler proved himself to be an outstanding leader and a highly courageous soldier and for his actions over 18 days of fighting, that culminated in his wounding and the subsequent amputation of his leg, he was awarded the Victoria Cross.

His citation records that he displayed ‘most conspicuous and consistent gallantry and outstanding fighting’. One of his men later recalled, “he was cool, he was calm, his orders were clear and concise; there was not one element of panic and that did a lot to inspire those serving under him”. He was invalided home and was invested with the Victoria Cross, while standing on crutches, by the Governor General of Australia, Lord Gowrie, on 11 June 1942.

After the war he was appointed as High Commissioner to New Zealand. He married Helen Morris on 28 May 1946. While in New Zealand they had two sons, David and Anthony.

Cutler’s next diplomatic posting was as Australia’s high commissioner to Pakistan. In 1961 he became Australia’s Consul-General in New York, and in 1965 became ambassador to the Netherlands but returned early to take up the Governorship of New South Wales at the young age of 49.

Sir Roden brought to the role of Governor the ability to relate to people from all backgrounds and he is remembered with respect and well deserved affection. In addition Sir Roden was a great supporter of organisations and charities such as the Australian Red Cross, Legacy, Scouts Australia, St John Ambulance and Save the Children Fund. He is also remembered for his view that the role of Governor required leadership. That view prompted him to comment on issues from time to time in the national interest, although it might have been thought safer and more comfortable not to have done so.

Sir Roden retired from the governorship in 1981 becoming the longest serving governor of New South Wales. During his career he had been created a Knight of the Order of St John of Jerusalem, a Knight Commander of the Royal Victorian Order and a Knight in the Order of Australia as well as being the recipient of many honorary degrees and holding positions on numerous boards. His wife died in November 1990 and he married Joan Goodwin in April 1993. In 1998 Sir Roden joined forces with close friend, and former war nurse, Mollie Edwards, to raise $2 million for a memorial, in Canberra, to nurses from the services.

Roden Cutler was regarded with great affection by Australians and in 2000 he was honoured as one of three Australian living Victoria Cross winners to be commemorated on a stamp and coin issue. He died in February 2002. His motto on his coat of arms was ‘Undique Servire’ which translates as ‘Service in All Places’ and indeed he is remembered not only for his great bravery but his outstanding service and compassion to the community. The Sir Roden & Lady Cutler Foundation is proud to continue his legacy of ‘Service In All Places’.

Sir Roden & Lady Cutler Foundation is committed to minimizing administration costs to ensure that we maximize our contributions to the community. It is our helpers, those volunteers who tirelessly assist us, that enable us to reduce our overheads to a minimum.

Our helpers range from the Sir Roden Cutler Medalists such as Ros Packer, Alan Jones, Bill Moss,students at Sydney Boys High to our volunteers who help deliver

the Charity’s services, to our sponsors who contribute financially. ‘Volunteers don’t get paid because they’re worthless but because they’re priceless’. Without our helpers, The Roden & Lady Cutler Foundation and our services that we deliver to the community would not exist. We are always looking for more helpers and donations and we would welcome you contacting us; no joy can equal the joy of helping others.